In 2013 researchers from Oxford’s Molecular Diagnostics Centre, NIHR BRC, WTCHG and Department of Oncology led by Anna Schuh and Jenny Taylor sequenced 351 lung, melanoma and colorectal tumours from patients using an NGS 46-gene hotspot cancer panel. Results were delivered with a median turnaround of 7 days with a report that indicated mutations with potential diagnostic, prognostic, therapeutic, or clinical trial entry implications. 97% of samples passed QC with 100% concordance with known mutations. 87% if patients had detectable mutations and 35% of patients mutations were actionable (mutations that appeared actionable based on the literature were found for 66% of melanoma and 39% of lung cancer patients). 40 patients were prescribed targeted therapies because of the sequencing data. For half of those patients no alternative genetic test was available locally.

The paper, published in January of this year, describes the work in detail and presents a cost analysis which compared the NGS panel test to existing single gene testing options.

NGS Cancer panel sequencing is cost-effective, at £339 per patient, if 2+ genes need to be tested

I’m writing about the work for two reasons 1) it presents a cost analysis lacking in most other reports about targeted sequencing for cancer 2) I agree with the authors that adoption of these methods by the NHS has been slow (IMHO too slow). More papers like this are needed to help convince the NHS to make big changes in genetic testing.

The NHS is looking at tests like this and at the same time sponsoring the Genomics England whole genome sequencing program. A $1000 genome looks cheap compared to a £339 cancer panel…but we (NHS users) probably want/need both to be available.

The labs standard workflows included Sanger sequencing, fragment analysis and/or pyrosequencing for BRAF, EGFR, KRAS and KIT. 108 samples were run in a retrospective pilot study where all had conventional diagnostic testing performed in tandem. The 351 prospective patient samples were also profiled using Roche COBAS assays. These data were used to compare the different technologies.

FFPE tumour sections were assessed and macrodissected before DNA extraction. The 46 genes 189 amplicon Ion AmpliSeq Cancer Hotspot Panel from Thermo Fisher Scientific was used to generate sequence data. The panel design was a balance between providing high clinical utility and keeping costs affordable by multiplexing for 4-plex 316, or 8-plex 318 chip sequencing. The paper did not discuss the difficulty of batching samples together which is often a significant headache – labs either run expensive single sample tests quickly, or batch samples for slower lower-cost tests.

The authors report on a “micro-costing” of their NGS panel and the COBAS assay run at the Oxford Molecular Diagnostics Centre. This aimed to identify everything required including equipment, consumables, and staff time, as well as accounting for failures and other errors in the testing process. The throughput numbers used were 832 samples per year, or 16 samples per week on the Ion Torrent PGM.

The NGS panel cost £339 per patient compared £71 for single gene testing of BRAF, £104 for EGFR, and £141 for KRAS. Table 4 (see below) in the paper shows that around half of the cost for these tests is consumables. And the authors point to multiple reports of costs including CRUKs requirements for tests to be under £300 [52], a colorectal test costing £1,703 [54], the 25-gene “MyRisk” panel at £2,581 [55], and an inherited bone marrow disorder test at £297 [56]. I’d add in the costs of the Genomic Health assay for breast cancer (even though it is not a mutation test) which is around £1500 (although the NHS has kept pricing confidential). Multiplex assays are far too expensive. Numbers in parentheses [] indicate references in the paper. 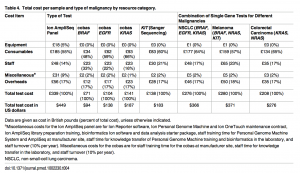 Most importantly the results of the cost analysis showed that the panel was cost-effective if 2–3 or more genes need to be examined. If NHS labs centralise tests like this and reduce the time and money spent on single-gene testing…..the data are evidence that NGS panel sequencng can improve mutation detection and the use of targeted therapies. Ultimately the NHS needs this evidence to determine whether NGS panels should be used, and are affordable, in routine clinical care.